This combines – sumptuously – the work of two of my favourite poets, Dana Gioia and Jena Strong.  With Strong responding compellingly to Gioia’s melancholic wise poem, “The Letter.”

And in the end, all that is really left Is a feeling—strong and unavoidable— That somehow we deserved something better. That somewhere along the line things Got fouled up. And that letter from whoever’s In charge, which certainly would have set Everything straight between us and the world, Never reached us. Got lost somewhere. Possibly mislaid in some provincial station. Or sent by mistake to an old address Whose new tenant put it on her dresser With the curlers and the hairspray forgetting To give it to the landlord to forward. And we still wait like children who have sent two weeks’ allowance far away To answer an enticing advertisement From a crumbling, yellow magazine, Watching through years as long as a childhood summer, Checking the post box with impatient faith Even on days when mail is never brought. 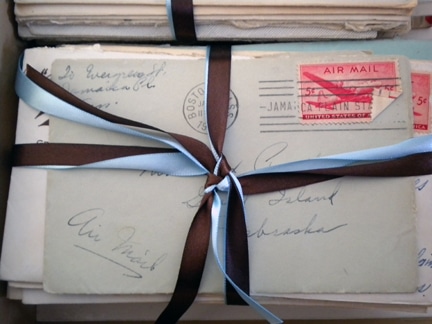 No, Dana. In the end, we will have received every letter, opened some neatly, along the crease of the envelope, using the letter opener we found that time at the five and dime when we were little kids with coins in our lint-lined pockets, that somehow we kept through all the loves and all the moves, all the well days and all the hand-wringing goodbye moments, tucked away and taken out to open letters announcing: I love you, you are loved.

Others, we will have been not so careful with, tearing them open with overeager hands or our front teeth like rabid animals, hungry not for news but for something to chew on and digest, to fuel us through one hard winter after another.

Yes, we sent messages out to the world, in bottles, in songs, in pleas and prayers, in exultation and in desperation, asking for so much and stopping one day and then another, no longer wondering if we deserved answers, deserved return receipt, deserved reciprocity.

We deserved it, deserved it all in the end, got what our starving hearts feared wouldn’t come. We arrived, at the end, here, to this place where open and honest learned to lie together, lion and lamb, storm and stasis, breath and gifts from an abyss of longing unwrapped, a party in our mouths of words and of kisses and of running to the mailbox after work to lift the lid from the tin mailbox– It came! It came! Mama!

All things in good time and all good things in time after so long waiting, Dana. This, I believe. This, I refuse to give up for another minute, not wasting a single morsel of the mail, the inbox– the sender and the receiver, the writer and the reader are one, and the same.