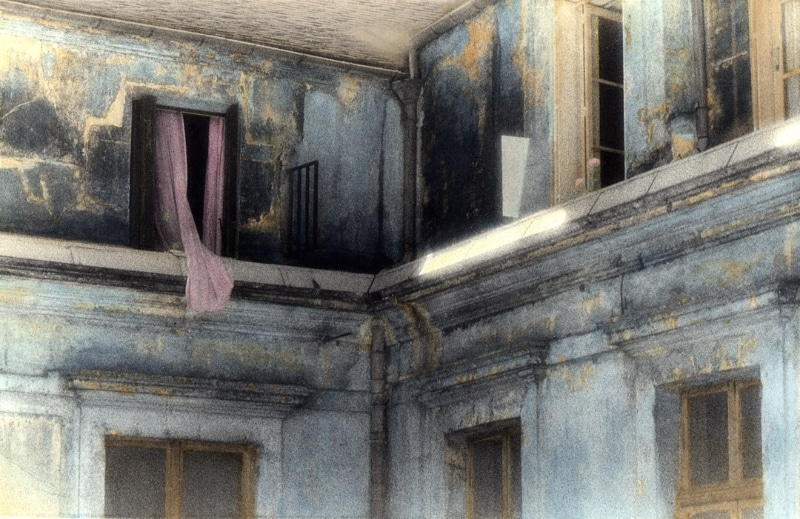 There is a powerful lure for me in places that are past their heyday, when the world is finished with them and they stand alone, unfrequented, undisturbed. After they’ve served their usefulness and been unceremoniously left behind.

A few years ago I rented a house in County Kerry in Ireland, on a small rise near the ocean. In a visit to the local town a shopkeeper asked if I’d discovered the derelict hotel just down the shore from where I was staying. Naturally, I sought it out that very day. There it stood, a monolith, perhaps 300 yards from the beach. It was an incongruous sight, and not a soul anywhere to be seen. Calla lilies, native to Ireland, with decadent blooms the size of cornets, grew everywhere. Most of the roof had given way and the concrete walls wore deep cracks and scars from the salt of the sea. Across the entire frontage of the property a flying buttress stood cracked neatly down the middle as if by a stupendous lightning bolt. Or was it a rogue wave, I wondered later?

It was down at heel now but was easy to see this place had been one of grandeur. In my mind’s eye I pictured the well-heeled patrons sipping tea on that wide sweeping deck facing the sea, and a host of fashionably dressed ladies leaning over the balustrade trying to pick up what was being said at the tables below.

I carefully picked my way across the front deck, through the minefield of debris and chunks of mortar, to the main door, lying unhinged across the opening. There was ample space for me to enter; many had been here before me.

Here was the lobby, once obviously grand, now graffiti-bombed and piled with debris. It had seen its share of squatters over the years, as judged by the sodden mattresses and cigarette butts and styrofoam cups lying about. Even a hot plate. (It didn’t work; I tried.) To the side of the room stood the remnants of a grand staircase that now ended abruptly after the fifth step as if someone had taken a gigantic power saw to it.

Anything of value was long gone. If it was movable, or removable, it had been pilfered. One standing wall housed several rows of wooden pigeonholes, strangely still intact, where once the room keys had been safely stored.

In a public washroom off the lobby the ornate porcelain sinks stood in a row along one wall coated thickly in bright green algae. Weeds grew belligerently out of each sink drain. Out of one drain sprouted a daisy-like flower in full bloom.

I wandered back through the lobby and stood out front. I pictured the coming and goings of the patrons so many years before across this battered entryway, the women with their parasols, their courtly companions asking deferentially, on a late summer afternoon by the sea: