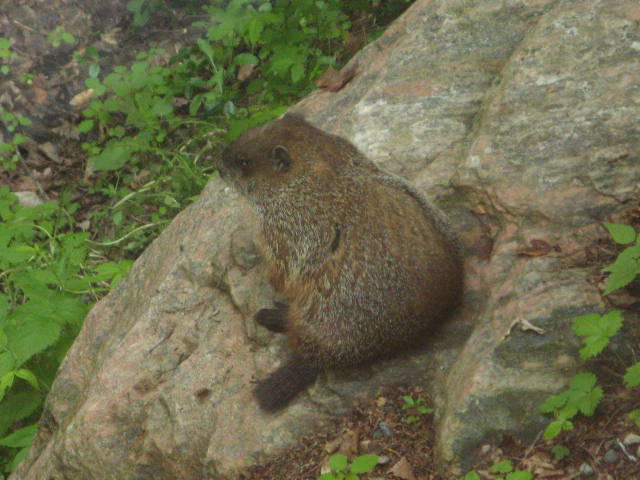 Gordon and His Triumphant Return.

Gordon and His Triumphant Return.

We thought he was but a memory.

For two years now we have searched in vain in the rock face at the front of our cottage for a trace of our pal, our faithful mascot, the groundhog we christened Gordon. Truth be told we first named him Georgina, until a biology major in residence made the startling announcement that this was in fact a male of the species we had befriended. So Gordon it was.

Gordon had a favourite crevice out front between two outsized boulders. The generously carved niche fit his rotundness perfectly. From this chosen perch he was able to survey all of our comings and goings, which he did religiously, but it offered more — a fallback position in that he could scoot backwards into his tunnel in a micro-second if he felt the need for safety. Or some alone time. Or a nap.

On sunny days he would stick his snout out to catch some rays and doze. When feeling emboldened he would lay his corpulent self on the upper level of rock, often belly up. He looked so comfortable I wouldn’t have been surprised to see him tuck his little arms behind his head as he lay, and a cocktail at his side with an umbrella as garnish.

During more mellow times he withdrew into the opening out of the glare and the spotlight. Only a glimpse deep inside would reveal to us his two bright eyes shining back out of the dark.

On a visit two years ago I noticed after a few hours that Gordon had not favoured us with a visit. No sign of our furry friend anywhere, throughout our stay. We locked up and left, feeling puzzled and bereft.

Alas, Gordon was nowhere to be seen that year or the next. Everyone had a different opinion of Gordon’s whereabouts but it was all just guesswork.

I hoped it was simply that he had moved to greener rock faces, but I had good reason to expect the worst. None of us were unaware that gophers are creatures reviled by many. (We all saw Caddy Shack!). They are infamous for tunneling their way through rock gardens and across manicured lawns, eroding all landscaping as they go. But Gordon had lived on our property for two years and we noticed no such damage.

The next trip up I went looking for Gordon and discovered a thick plastic tarp stuffed deeply into his crevice. I pulled the sizable contraption out with considerable effort, wedged tightly as it was, drawing with it a cavalcade of soil and small stones.

It seemed someone in the area was taking no chances on gopher tomfoolery and had taken the matter into their own hands. But what to do? Do you go to a neighbour’s door and ask calmly if they smoked out your pet gopher? We decided to assume the best possible scenario for Gordon, that he had chosen to grace another cottager’s rock formation. But we missed his holding court out front through weekends and vacations, how he appeared like clockwork at the mouth of his crevice at our every arrival, our little wordless welcome home.

Indeed, a visit here never officially began until we had communed with Gordon. I felt sad about the whole business and somehow responsible. Every time I looked at his little spot out front my heart sank.

That was two years ago.

Today we returned to the cottage for a few days. While I was unpacking I glanced out my bedroom window to the rock wall that lies behind the cottage. There sat contentedly a portly brown gopher, and although I have no proof this is indeed our Gordon, I choose to believe that it is.

I mean, he tilts his head at the sound of his name, for starters, and even noise at the window and the flash of my camera when I took the above photo didn’t send him scurrying.

I hope that means he’ll learn to trust us again and decide to stay.

After all, he’s chosen a better view this time. Now he can watch us swimming in the lake while he suns himself.